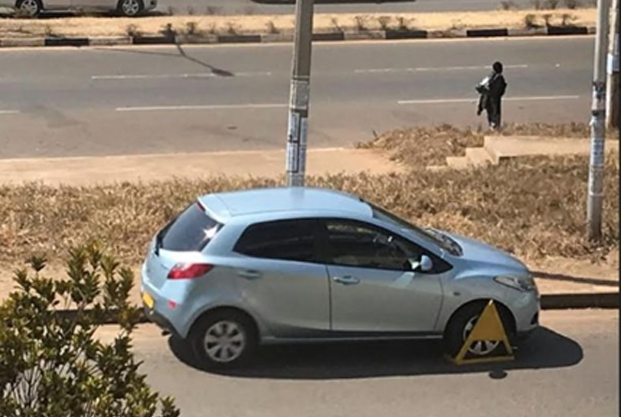 Lilongwe City Council (LCC) has embarked on a rare campaign of clamping vehicles and motorcycles which are wrongly parked in the city as a way of maintaining traffic order. Council’s Public Relations Officer (PRO), Tamara Chafunya said the city council decided to start the campaign after noticing the disorder in parking of vehicles and motorcycles in the city. “We observed chaos in terms of the way people park their vehicles within the city. For example, we have seen people parking their vehicles in pedestrian pave ways and also office complexes which are not designated as public parking areas. “The Road Traffic Act gives powers to the local authority to manage traffic in the city. For this reason, in our bylaws we thought it wise to include a bylaw on traffic which gives powers to the council to enforce proper parking of vehicles,” Chafunya said. She said the bylaw was adopted in July this year (2019) and became operational on August 15, with the city centre as a pilot point. The city’s PRO further said the local council is working with the Road Traffic Department in enforcing the traffic bylaw.

By the traffic bylaw, perpetrators of wrong parking will be fined K5, 000 which will be paid through the city council’s bank account or to the team which will be monitoring the initiative in order for their cars to be released. According to the city’s spokesperson, LLC is striving to improve sanity and traffic in the city through construction of better roads. “We want to bring order in which traffic is managed in the city. Through the initiative, we have also started road development which includes creation of duo carriage ways to reduce congestion on the city’s roads,” she said. She, therefore, urged the public to adhere to the city council’s bylaws for it to successfully implement its initiatives and transform the city to a better status.

However, one of the minibus drivers in Lilongwe, Macfford Sefasi bemoaned the initiative, saying it would negatively affect their business as sometimes they park their minibuses on unauthorized places to search for customers. Sefasi, nevertheless, said he would be obliged to obey the bylaw to avoid paying the penalty fee which he described as too high compared with his everyday earning.